Our  Tiger Moth DH82A (s/n EM 945) was built at Cowley in England in 1943 by Morris Motors (the same company who built Morris cars). The aircraft was then commissioned into the Royal Navy in England as a training aircraft. 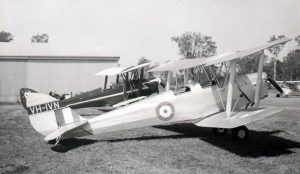 IVN in a previous livery.

In 1952 the Tiger was placed on the British Civil Register. In 1953 the aircraft was shipped to New Zealand and registered ZK-BBF and operated in the aerial agricultural industry as a crop duster but did not see a great deal of service due to a couple of crashes and spent a period of time in hangars.

The Museum painted the Tiger a bright yellow colour being the base colour used by the RAAF on their training Tiger Moths during the Second World War.

In January 2000 the Tiger Moth Museum adopted the RAAF markings A17-302 of a Tiger Moth which was flown by S/L Fred Christensen of Mackay and operated at the following locations: 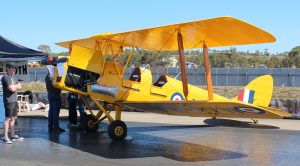 IVN at the Palmyra “Wings and Wheels”

In January 2000 the Museum’s Tiger Moth was christened the “City of Mackay” by Mayor Cr. Julie Boyd to reinforce its local identity as a community owned aircraft operated by a group of volunteers. 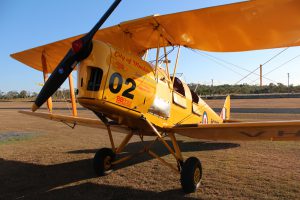 The aircraft was then commissioned into the Royal Australian Air Force and delivered with long-range fuel tanks to 2 Aircraft depot Richmond on 29.06.1942 and its history is as follows:

1942 – Blown over in a violent local wind storm Manbulloo 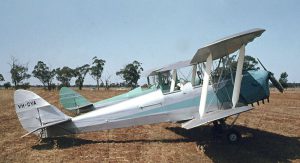 CYA in a previous livery 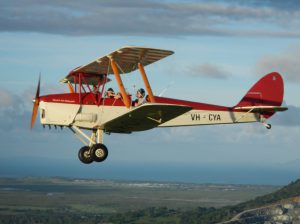 Air shot of CYA. Mackay’s Northern Beaches in the background.

1957 – Listed for disposal and Issued to purchaser

Stayed in N.S.W. For many years around Gilgandra and used as a crop duster. Eventually retired from work and restored by private owners to it’s present condition. 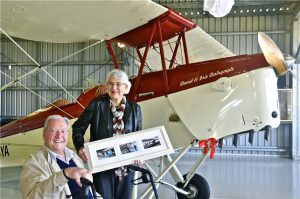 Our Patrons David and Irie Dalrymple

Flight times etc. for the delivery of CYA from Luskintyre to Mackay May 2011.