The following article was published in Aviation Safety Digest #113 in 1982. It provides a brief history of the Tiger Moth, both generally and in Australia. There are currently 175 Tiger Moths on the Australian Aircraft register. This number includes airworthy aircraft and those in various stages of restoration.

“In this age of mass production and glossy products, row upon row of sleek modern designs confront us at any airfield we may visit. Small , medium and large , of varying hues, these aircraft perform a wide variety of tasks in relative comfort and efficiency …….. but are they  ‘aeroplanes’?

As one walks the lines of modern aircraft, more often than not an anachronism appears amongst them, immediately identified as a ‘real aeroplane’. Its antiquity is apparent: two wings, open cockpit and fabric covering, held together by wire, and nearly always in immaculate condition . This is a TIGER MOTH.

The Tiger Moth evolved from the De Havilland DH- 51 of 1924 and its successor, the DH-60 Moth of 1925. The DH-60 engendered a line of variants culminating in the DH-60T Moth Trainer , first flown in April 1931. Of the 72 DH-60Ts built, eight were constructed with a small amount of sweep- back on the main planes and designated Tiger Moth, the second De Havilland type to bear this name. (The first was the Monoplane DH-71 Racer of 1927 .) In turn , one of these eight was further tested with dihedral on the lower wing and increased sweep-back, effecting a change of type number to DH-82. 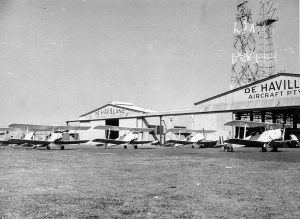 Tiger Moths manufactured in Australia outside De Havilland’s hangar at Mascot during WW2.

Bearing the Class B test marking E-6, airframe number 1733 – the first true DH-82 – made its first flight at the hands of De Havilland’s test pilot Hubert Broad on 26 October 1931 at Stag Lane Aerodrome, Middlesex. Built to meet Air Ministry Specification 15/31 the design led to immediate military orders, and a total production of 135 examples of this model followed . Designated MKl by the RAF it was powered by the 120 HP De Havilland Gipsy MKIII engine. The prototype, registered G-ABRC, received its Certificate of Airworthiness on 18 March 1932 and served with De Havillands for many years. At the outbreak of war it was impressed into military service and allotted serial number BB723. After serving in RAF and RN units it was sold as surplus in January 1951 and scrapped in 1953 without being reregistered. No example of either the DH-60T or DH-82 came to Australia contrary to popular belief.

The Tiger Moth as we know it in Australia is the type DH-82A, the major production version of the design. This variant was the result of Air
Ministry Specification T26/ 33 which called for installation of the De Havilland Gipsy Major MKl engine of 130 horsepower and other design
changes including a plywood turtle-decking in place of the fabric-and-stringer structure , an increase in fuel tank capacity from 18 to 19 gallons, elimination of the deep front-cockpit door and installation of a fixed rear seat in place of the adjustable seat of the DH-82. The first DH-82A, airframe number 3175, was registered as G-ACDA and certificated on the 10th 0f March 1933. At the outbreak of war this aircraft was impressed and subsequently saw service with both the RAF and RN. Known to the RAF as the MKII, 8811 examples of this sub-type were constructed.

A further 420  Tigers were built with wooden DH-60GIII fuselages. These were designated DH-82B ‘Queen Bee’ target aircraft. Some Canadian production was designated DH-82C, a variant which included those fitted with the Menasco D4 Pirate engine of 120 horsepower and the De Havilland Gipsy Major MKIC of 145 horsepower.

The Tiger Moth in Australia 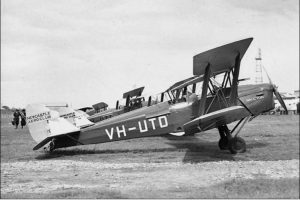 VH-UTD was sold new to the Newcastle Aero Club at Broadmeadow, NSW in June 1935, and named ‘Halcyon’. It is seen above at an air pageant at Mascot, probably in the late 1930s, in this image from the State Library of New South Wales collection via the Ed Coates Collection. VH-UTD was impressed into RAAF service in 1940 as A17-675. It failed to re-emerge after the war having been written off in an accident.

The first Australian Tiger Moth, VH-UTD, was placed on the register on 28 May 1935. This was the 126th production aircraft and carried airframe number 3320. It was the fore-runner of 18 civil and 20 military examples imported prior to the outbreak of war. Another six arrived in 1940 for civil use. Of those 24 civil-registered Tiger Moths, three were purchased by the RAAF and 18 were impressed. VH-UTD became A17-675 on the 22nd of July 1940 and saw service with No. 8 Elementary Flying Training School at Narrandera, NSW. As the war progressed Australia undertook to train aircrew under the Empire Air Training  Scheme and, as part of this commitment, production of 350 Tiger Moths was started at De Havilland’s Mascot Factory. Ultimately 1135 aircraft were constructed there, the last 65 being delivered unassembled.

Of the 1070 aircraft assembled, one was released directly to Broken Hill Aero Club as VH-AEB, two went to Burma, 18 to the USAAF, 20 to the RNZAF, 41 to India, 62 to the Netherlands East Indies, 96 to Rhodesia, 120 to South Africa and 712 direct to the RAAF. As well, 100 British built ex-RAF aircraft were shipped here, bringing the total number of Tigers in Australia by the end of the war to 1127. RAAF serial numbers ranged from Al7-l to Al7-759.

Post-war, the majority of the military Tiger Moths were entered on the civil register. The type was used for practically every purpose imaginable, although primarily in the training and cropdusting roles. A few were placed on floats and several were fitted with canopies. Many were privately owned. Of the original 21 civil Tiger Moths acquired by the RAAF eight were returned to civil use post-war. One of these was airframe number 3623, originally imported as VH-UYQ. This aircraft was re-registered VH-CCE in November 1955 and is now the oldest surviving Tiger Moth in Australia. (It has been in storage since 1975.) VH-UTD – the original Australian Tiger Moth – was written off in February 1945 after an accident in which it stalled and spun in.

In 1954 there were still more than 300 examples of the Tiger Moth on the register and high numbers were maintained until the mid-sixties. The current register lists well over 100 examples – not a bad record for a type that ceased production in Australia 76 years ago.”