Aerial Agricultural Use of Tiger Moths in Australia

Both of the Mackay Tiger Moth Museum’s DH82A aircraft have had previous lives as crop dusting aircraft.

The first aircraft used in Australia for crop dusting (1947), spraying (1948) and spreading (1949)  were DH 82A Tiger Moths. They were not, of course, designed as agricultural aircraft, but as two-seater trainers. Modifications to them were many but basically involved removing the front cockpit and replacing it with a hopper. The Tiger Moth was powered by a 130hp engine and had a payload of 33 gallons of spray or 330 lb. of super-phosphate. The DH82A was phased out by 1965 following agreement between the Department of Civil Aviation (DCA) and the industry owing to its high accident rate and the availability of other more suitable alternatives.

Below is a brief history of the Tiger Moth’s use in Aerial Agriculture and the eventual phasing out of the aircraft for this purpose:

In the early post-Second World War era, aerial agriculture experienced something of a boom. Purpose-designed agricultural aircraft were, however, some years off and the ready availability of cheap war-surplus aircraft led to the use of marginally-suitable types such as the ubiquitous Tiger Moth.

Not surprisingly, the accident rate was very high in this demanding role and DCA began to take a close interest in standards of training and operation within the industry, as the newspaper cutting below from the 6 April 1957 edition of the Perth News shows:

Operational Handbook for the Guidance of the Industry in Australia . 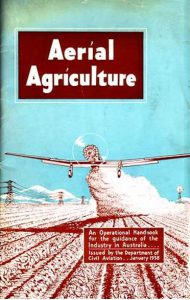 The contents of this handbook included:

The foreword is reproduced below:

“In recent years aerial agriculture in Australia has undergone rapid expansion. Organisations both large and small have taken part in this developing industry in which, since 1954, operations have increased threefold. Such spectacular development has not been achieved without cost. In aerial agriculture, where flying skill and safety considerations are so very important, accidents have occurred. Some of them might have been avoided had closer attention been given to basic safety measures.

Aerial agriculture operators, whether they be large or small organisations, must build customer relations at the level of their field representatives. Perhaps more than in any other industry sales promotion is a part of the duty of the man on the job; in other words, the aerial agriculture pilot. He can, by his knowledge of plant pathology and entomology and the correct use of herbicides and insecticides render invaluable assistance to the man on the land. A well-trained pilot backed by the knowledge available from State and Commonwealth Agriculture and Health Departments, can play an increasingly important part in the country’s agricultural economy. 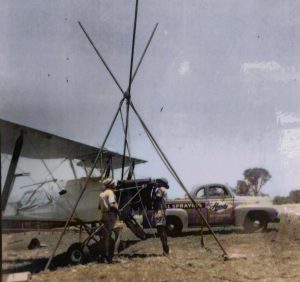 The aim of this booklet is to provide technical and practical information so that operators may stabilise the aerial agricultural industry by safe and orderly practice. Much of the basic information has been supplied by courtesy of the New Zealand and the United States Governments, and co-related to Australian conditions by an officer of the Department of Civil Aviation who has studied aerial agriculture both overseas and in Australia. Chapters on the medical aspects of insecticides, classification of agricultural compounds, and flight fatigue have been contributed by the Division of Aviation Medicine, Department of Civil Aviation.

DCA’s concern over the high pilot fatality rate in DH.82 crop spraying and dusting accidents resulted in the requirement to fit an overturn truss  to protect the pilot’s head. In 1961 DCA implemented a three-year plan to ban Tiger Moths from ag work: all Australian agricultural operators were required to reduce their DH.82 fleets by a third each year.

This requirement drove the introduction of safer and more suited aircraft including the the locally assembled CA28 Ceres and Transavia PL12 Airtruck and the imported Cessna 188, Piper PA 25 Pawnee, DHC-2 Beaver, G-164 Ag Cat, and the Snow Commander S-2D, to name the most numerous.

Super Spreading in a Tiger Moth.