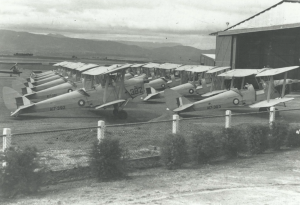 Tasmania’s only RAAF Flying Base during World War 2 was established at the site of the current Launceston Airport on 29th August 1940, and No 7 Elementary Flying Training School commenced training in September of that year. By the time training ended in late 1944, over 1800 pilot trainees had passed through the base as part of the Empire Air Training Scheme before the base was disbanded on 31st August 1945. 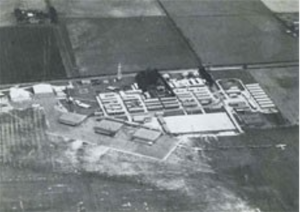 One pilot who trained at No7 EFTS in 1942 was F/LT Bill Schoon who went on to fly Boomerangs and Spitfires in the defence of Australia.

Below is an excerpt from his book which describes his initial training and time at Western Junction. Bill took the photos below between May and August 1942 with his Box Brownie camera.

The following link leads to  a tribute to Bill Schoon prepared by his daughter Lyn:

Excerpt from ‘Angel On My Wing’© – From the memoirs of R.W.G. SCHOON.

“After a very rough crossing in the old ‘Narana’ (most of us were seasick) we spent a miserable time on the train to Burnie where we had landed due to fog.  As our train wound its way along the coast, we were treated to tea and sandwiches by the local residents.  Then a mad scramble to the windows as we approached our destination.  Real aircraft with RAAF roundels. Tiger Moths, taking off and landing right alongside us. We were here at last! 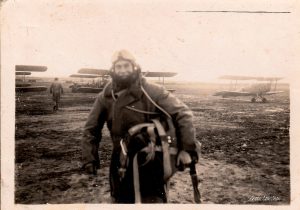 ‘Keep her straight!’ my Instructor called as I valiantly tried to apply rudder during our first couple of take offs.  Gradually I got the feel and the reaction, and from a satellite field F/Lt. Tooley really gave me the works!  In calm conditions he would let me do the take off, then at 10 feet he’d yell, ‘I’ve got it!’ and holding it down to gain speed he would then execute a semi-stall turn – one moment standing on our tail, and the next, pointing straight at the ground! At about 20 feet he would call, ‘Land it!’  While I was petrified at his manoeuvres, I guess self preservation was present as I soon mastered the art.  I later found out that he always had a bet with the other Instructors as to whose student would solo first!  I won him a few beers as I soloed in 7.05 hours and I was the only one on our course to solo at night, as the weather had restricted our exposure.

As our course progressed we learnt of the fall of Singapore and a certain Walter Mitty atmosphere prevailed amongst us, as we all knew Australia was virtually defenceless. 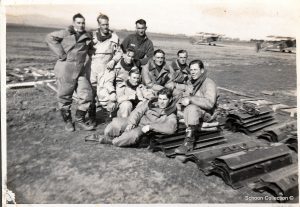 We were very fortunate to have an ex W/O Disciplinary on our course.  At the age of 32, Charlie Williams had re-mustered to a lower ranking AC11 in order to become a pilot.  He befriended me and shared the adjacent bunk.  He taught himself aerobatics by the same method he used as a D11 Instructor.  For long periods Charlie would sit opposite me reciting the control movements and I would check him from the book.  He was placed in charge of our course and we were the smartest group, for when we worked, it was hard but very fair with no favours or vendettas.  Even the despised Service Police respected him.

My Instructor had shown me one slow roll before he went on leave and I was given a check flight by his replacement.  As he got out the cockpit he asked, ‘Have you been shown a slow roll yet?’  I replied, ‘Yes Sir.’ So he told me to go off and practice a few.

Climbing up above the beautiful Tasmanian scenery, I really felt quite grand and decided to take the Tiger up to 5,500 feet.  Okay, straps tight then down to 110 mph, back stick and roll – piece of cake! . . . after all, I knew what the book said to do – but when I was upside down, the aircraft remained inverted.  I dropped a few inches out into the slipstream and the motor, being deprived of fuel, stopped.  A small stream of petrol from the overflow of the fuel tank gushed past my exposed face, and I must admit I was a little apprehensive, but thought, ‘I’ll give the Tiger her head.’  Slowly the nose dropped, speed increased, then gradually instead of blue sky I could see green fields – so, all would be well.  To my surprise, with a tremendous roar the engine started again – I had not closed the throttle and the G Force had renewed the supply of fuel to the wind-milling propeller.  When the vertical diving position was reached the old Tiger began to shudder and shake alarmingly!  Looking straight down I saw a group of horrified golfers freeze in their tracks and stare straight back up at me!  The air speed had already completed one revolution and was now on the 2nd time around!  The adrenaline was really pumping and my only thought was, ‘I must pull out or I’m going to hit the bloody ground . . . yet if I pull back too tight the wings will fall off!’  Slowly the arc continued as did the awful shaking of the wings, when suddenly, blue sky and I was right side up again.  Then try as I did, I couldn’t prevent the nose from rising straight up into the vertical climbing position and by this stage, I was convinced I had suffered a control failure.  Just as I went to release my harness and bail out I felt the stick respond and managed to level the aircraft.   It was a very sedate Trainee who landed back on the aerodrome and asked for more dual on slow rolls! 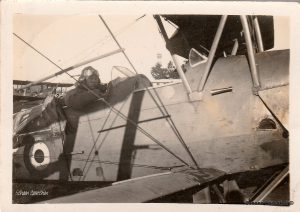 Back in the bunk house I discussed it with Charlie and he worked out that I had taken off aileron.  When I became inverted I should have held it on and throttled back.  The reason I couldn’t get the nose down was the stiffening and increased control force required at high speed.  Indeed, I had been very lucky and learnt a very valuable lesson.

Charlie was a very dedicated and fearless man and went on to Captain a Catalina Flying Boat.  I was saddened to hear later that he had been shot down in flames over Makassar when, as briefed, he flew low over the harbour to drop mines.  He was a sitting duck for an anti-aircraft strong post which had only just been installed by the Japanese . . . one of the truly great men of our era.

At Western Junction we saw our first Bombers.  We were visited by no less than 3 Airspeed Oxford twin engine trainers and we were very impressed.

When it came time for them to depart they taxied out onto the muddied field.  The first began his take off run but acceleration, due to the quagmire of mud was slow and he had to abort.  Again he tried but with the same result.  Then taking a slightly different path, he attempted his third try.  This time we could see that he was absolutely determined to fly come what may.  Just short of the fence he hauled it off, missing the fence posts by mere inches, but mushed down heading straight for the railway station, which was lower in elevation and surrounded by a row of tall pine trees.  It was quite obvious that he couldn’t clear them, so he cut the engines and scored a great goal with his cockpit precisely in the middle of 2 huge trees!  Fortunately the Bomber didn’t catch fire and, apart from a little shock the crew escaped unharmed. 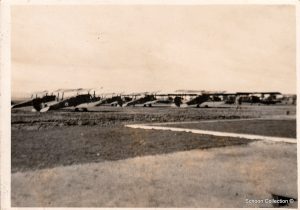 Naturally an Inquiry was set up and this arrived in the form of a brand new Lockheed Hudson Bomber.  This was a real operational machine and we all stood in awe as it passed overhead.  The pilot, a Wing Commander, came in a little fast, touched down beautifully, but his brakes locked up on the muddy surface and he aqua-planed through the fence, ending up ungraciously on his belly in a ditch!  I think the assessment for both accidents was, ‘Too small for twin engine aircraft to use.’ . . .

We finished our course with about 60 hours each on Tiger Moths.  We were paraded and asked for our choice – Fighters or Bombers?  A few, including Charlie, stepped out for Bombers.  The remainder of us were reformed and numbered off, with every second pair going to Bombers.  I drew Fighters and was posted to Deniliquin to fly Wirraways.  The others went mainly to Canada where many were killed in training accidents, and a lot more sadly did not survive their tour in Bomber Command.”