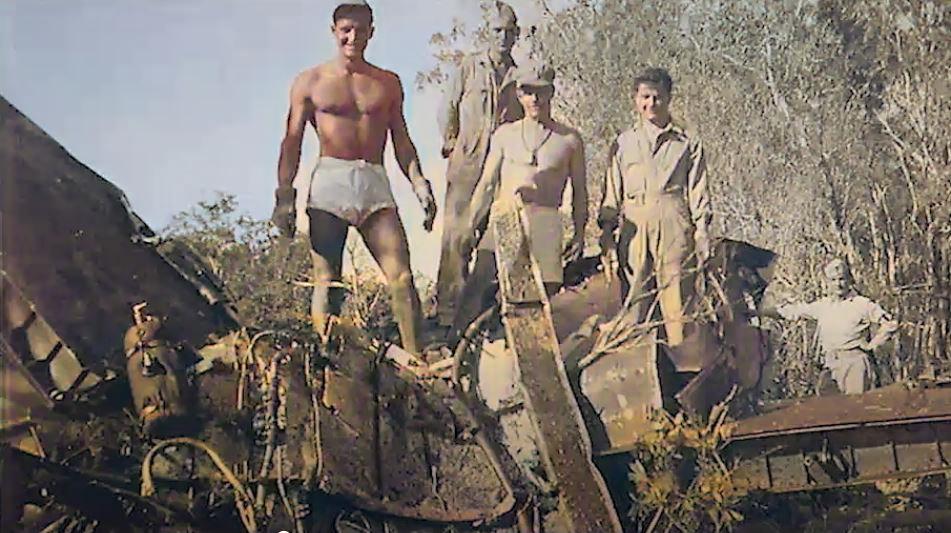 Wartime censorship prevented any mention of the incident in local or international media, and the crash — the worst involving a transport aircraft in the southwest Pacific during the war — was kept classified by the US military until 1958. Families received a cursory telegram stating only that their son had been killed in the Southwest Pacific area. 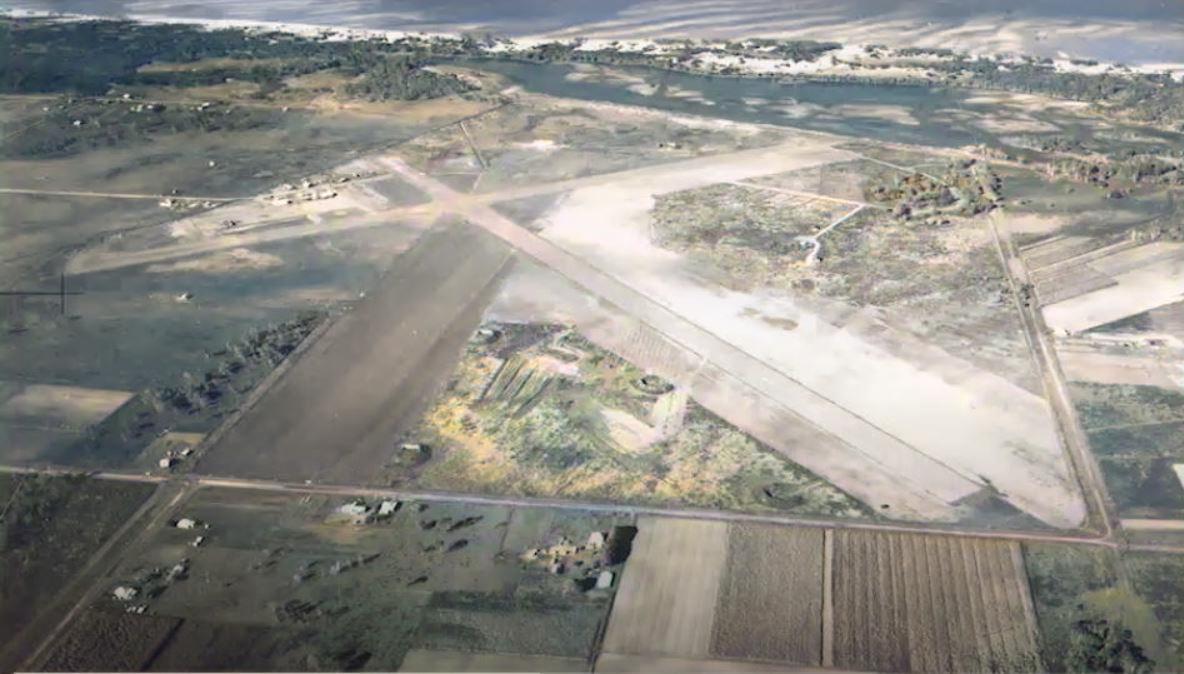 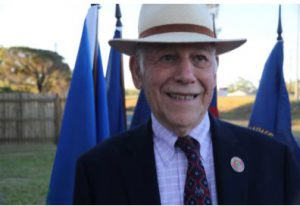 Robert Cutler’s father Captain Samuel Cutler was one of the last to see the servicemen alive.(ABC Tropical North: Sophie Meixner)

American university professor Robert Cutler wrote a book about the incident after discovering his father closed the aircraft doors on the ill-fated flight.

Captain Samuel Cutler, then 38, was assigned as the first military commander for a new rest area planned for US soldiers in Mackay, an ideal location due to the peaceful atmosphere and malaria-free environment.

“It was his job to be the officer on the day to load the troops on the plane, to send them off,” Professor Cutler said.

“Dad, being a schoolteacher and a bit of a historian, for every day he was overseas he kept a daily diary.”

“What a day and a TRAGIC one. Up at 4am and lined up 35 enlisted and two officers to go on … to Moresby.

“At 6.02am, two minutes after I turned my back on [the plane] … it crashed into some woods five miles away and exploded killing 40 people, with only one saved.

“I put the men on the ship and so had a direct part in sealing their fate.

“Also I was at the scene of the crash and saw the mangled bodies, killed while flying at 200 mile per hour. Terrible.” 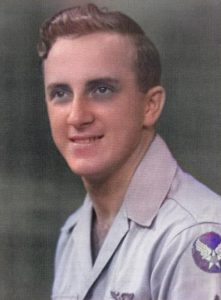 Crew Chief Staff Sergeant L Dale Curtis was one of the 40 US servicemen killed.(Supplied: Col Benson).

Despite witnessing the aftermath of the crash and being a close colleague of the six crew members who died, Captain Cutler never spoke of the incident to his family.”He was very much haunted by that,” Professor Cutler said.

“When he came back [to the US] two years later … he never spoke anything about the air crash.

“Later on in life he told me he witnessed a terrible thing, and he said, ‘don’t sit in the front of an airplane’.

“The survivor sat in the rear of the airplane — that’s the safest place to fly.”

No Official Records of Crash

After reading his father’s account of the crash, Professor Cutler was sceptical such an incident occurred.

“I was doubtful there had been an airplane crash of this magnitude,” he said.”I checked with people in Washington [DC] and there was no record of it.

“After I finished the 300 pages of transcriptions … I decided to come to Australia and meet some of the families my dad mentioned in the diary.

“Within 20 minutes of arriving in Mackay … one of my friends drove me to see the Bakers Creek air crash site and when I saw it I couldn’t believe it.

“I felt there was a need to tell this story.” 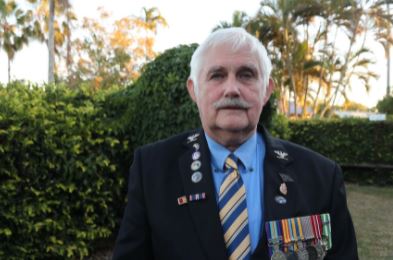 Mr Benson has travelled to many of the 23 home states of the American victims.(ABC Tropical North: Sophie Meixner)

RSL military historian Col Benson said some families of the servicemen killed never received an accurate explanation of their loved ones’ deaths.

“The families never knew anything, not officially, other than … ‘on June 14 your son was killed in an air crash in the southwest Pacific’,” he said.

“Censorship was pretty strong, so families were left without any knowledge — the crash was declared secret for fifteen years.

“But the impact of that still lingers on, 75 years after, and it’s a tribute to their character that their families have never forgotten.”

Over the years local and American historians began investigating the crash and contacting the families of the victims, with official memorials erected in Bakers Creek in 1992 and in Arlington National Cemetery in Washington DC in 2006. 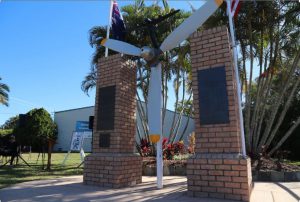 he memorial at Bakers Creek was erected about 1km from the crash site in 1992.(ABC Tropical North: Sophie Meixner)

“Most of these families have been overjoyed to learn something,” Mr Benson said.

“The navigator’s younger brother didn’t find out until 2003.

“I accompanied him on a 2,600-kilometre journey three years ago to visit his brother’s grave.

“His brother’s remains had come home, they knew he had been killed, but never had any details.

“Sadly the parents went to their graves not knowing.” 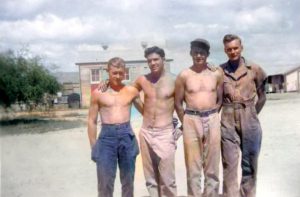 The families of all victims have now been contacted, including that of Michigan Private First Class Frederick C. Sweet, whose relatives eluded a team of investigators for more than a decade.

The sole survivor, Texan Corporal Foye K. Roberts, suffered major injuries in the crash but went on to serve on the frontline until the war was over.

He said he remembered nothing of the crash other than saying a prayer as the plane began to lose altitude.

”They Wanted to Get Home” 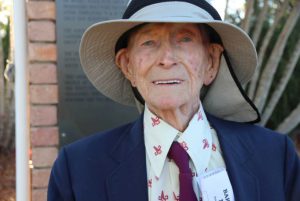 Mackay local Ray Pittman was a teenager in 1943 and used to shine the shoes of the visiting American servicemen.

“To think of all those lives lost, and I did shine some of their shoes at the time,” he said

“We were all sad, the whole of Mackay was sad.

“That disaster was just shocking, when I saw pictures later on it was just terrible.

“At the time [of the accident] I got on my pushbike, I dropped everything and tripped off to Bakers Creek, but they wouldn’t allow us … down to the crash.”

He said he had spoken to many of the victims when they were stationed in Mackay.

American soldiers enjoy a ride on a cane train in Mackay during an R and R break.(Supplied: Col Benson).

“All of them hated being up [in Port Moresby], they wanted to get home,” he said.

“You don’t blame them, they didn’t know if they were ever coming back.

“They wished they’d never been over there, but it was a war they didn’t want to be in, and nobody else wanted to be in it either.”