The Mackay Tiger Moth Museum was formed in 1974 (then The Tiger Moth Trust) to purchase a Tiger Moth that had been restored locally and was in danger of being sold to America. 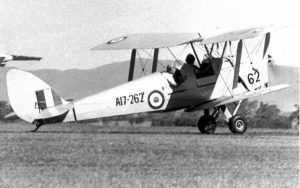 Support was gathered from the Mackay community to purchase the Tiger Moth and the Trust (now the Museum) was formed to administer the operation.

The original Tiger Moth VH-AYW was purchased by a group of volunteers from The Mackay Aero Club, who raised money with a raffle of a motor vehicle offered by North Jacklin at a greatly discounted price.

The sub committee registered the name of ‘The Tiger Moth Trust’ that later became the Mackay Tiger Moth Museum.

Harvey Hutchinson about to parachute from AYW.

The two Tiger Moth aircraft are owned by the Mackay community with one being christened the “City of Mackay” to confirm its ownership.

The trust became an incorporated museum with tax deductible status and is run totally by voluntary labour for administration, crewing, and pilots. No one receives any remuneration for their efforts.

(Do  you live in the Mackay area, have an interest in aviation and some spare time on weekends?

The Mackay Tiger Moth Museum is currently seeking suitable* volunteers to be trained as ground crew.

*You must be eligible to obtain an ASIC: Aviation Security Identification Card.) 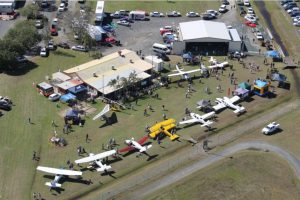 “Wings and Wheels” at Mackay Airport.

Find Us Here on Google Maps